A guide to chimney issues

With chimneys and fireplaces, repairs and maintenance are inevitable.
Regardless of the age or design your chimney may have, it’s almost certain your chimney or fireplace will experience some issues that will require maintenance or repairs over time.

Even things like a bird’s nest in your chimney can cause you some considerably irritating & costly problems.

The most common reasons behind chimney issues will definitely vary from chimney to chimney however we’ll cover the most common problems and the causes on this page.
​
Chimney Masonry Basics

A masonry chimney can be made from a variety of materials including bricks & mortar, stone, concrete, block, flue tile, stainless steel and even cast iron.

Some of these different materials can become quite vulnerable to rainwater as well as other elements such as snow and ice if not properly sealed and installed or maintained.

External weathering and exposure can cause considerable aesthetic and structural damage to chimneys as some materials are porous by nature and freeze thaw cycles can wreak havoc if damage is left unrepaired or unnoticed leading to a chimney rebuild.

For these reason’s it’s important to keep an eye on your chimney and inspect it regularly.

Now you may have a basic understanding of the different components that make up a traditional fireplace and chimney from the infographic above.

Don’t worry if you still feel a little lost, we’re going to cover some of this in more detail.

Let’s move into what can actually go wrong with your chimney and/or fireplace.

The gaps and cracks in the masonry form little pockets of waste particles and carbon build up, some of which is flammable.
The flammable build up is an oily, sticky substance called creosote which is similar to soot except that it can be reignited from sparks and embers. If there is a considerable build up of creosote, it could become ignited by a rogue spark or ember when the fireplace is in use.

A Creosote Sweeping Log can be purchased from many hardware stores and burned in the chimney to help reduce build up over time. The logs have chemicals that bond to the creosote when they come into contact with it in the chimney during burning. This can help reduce the creosote deposits inside a chimney and reduce the chance of flue fires in the future.
Along with maintaining a clean chimney free of creosote, it’s important for your chimney to be structurally sound. Sometimes, chimneys are built on a different foundation that is separate from the rest of the home, and they can experience settlement differently by pulling away from the house.

An increase in odor from the fire, smelling more like a campfire than an indoor fireplace, is a possible sign of a dirty fireplace and chimney. This odor from creosote build up can be an indicator of an increased chance of chimney fires.

The picture below is an example of a pretty severe creosote buildup in a chimney flue that is a definite fire hazard. 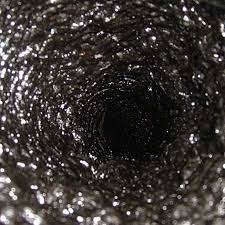 There are various points of entry for water penetration to occur and water entering the chimney can lead to several issues and  problems.

There's the usual damage and mold that water penetration can cause to areas around your chimney from leaky flashing and then there's the damage from freeze thaw cycles which breaks apart the chimney, it also has a lesser known result when it mixes with creosote.

When moisture mixes with creosote it becomes acidic which can cause premature rusting of chimney parts such as the fireplace damper, old steel ties and as mortar is alkaline based the acidic solution slowly starts to breakdown the mortar itself.

Typically the water will enter through a damaged crown, cracks in the chimney or through flashing that has deteriorated or has been poorly fitted. Frost will cause the most damage as the temperature drops the moisture expands breaking apart the mortar and even the bricks themselves (known as spalling)

Water damage can be prevented by checking your chimney annually and repairing issues as they arise.
There are some water repellent treatments available however these will not stop and existing leak and only serve to reduce moisture absorption on a chimney without existing cracks.

Chimney Crown & Cap
​The chimney crown is the top part of the chimney which acts as a barrier from water entry and protects against snow and ice build up. It covers the chimney from the clay flue liner or stainless steel liner to the chimney edge.

Some chimney crowns will be constructed with an overhang from concrete cast in place with a 1.5 inch overhang and a groove cut in to the underside of the cap to allow the water to bead and drip. Another option is to install a stainless steel cap which are typically cheaper to install however don't usually offer the over hang of 1 inch and drip edge required by code unless specifically manufactured with this in mind which will often cost a little more.

Flashing refers to the material sealing the area between the roof and the chimney which prevents rain water and snow melt from entering in to the house at the roofline. It acts as a barrier preventing damage to the ceilings, walls and floors which would otherwise be damaged extensively every time it rained.

It is fitted between two dissimilar materials and layered so water will shed and not enter the home. It also comes with the ability to allow both the roof and the chimney to expand and contract at their own rates without causing any problem to the waterproof seal.

Deteriorated or improperly fitted flashing will leak every time it rains however sometimes the leak is small and goes un noticed until mold and other signs begin to show on the inside of the home.

Surprisingly few masonry contractors have the required knowledge and skill to build a masonry chimney properly one area this can set you up for failure is chimney height.

When the chimney is not tall enough above the roof line it is unable to prevent downdraft which can lead to smoke and gases being forced back down the chimney. For wood burning chimneys the short chimney can mean hot embers and ash land on the roof increasing the likelihood which can ignite dry leaves causing a fire. 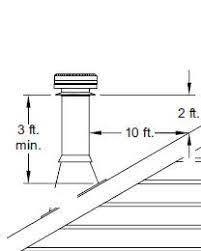 #1 Acidic byproducts - When oil-fired appliances are used they produce corrosive residues that settle on the walls of the chimney and clay liner edges. When these byproducts mix with moisture an acidic solution is formed which begins to breakdown mortar and soften the walls of the clay liner causing it to flake and openings to form between the liner pieces. This allows dangerous carbon monoxide to leak through the gaps.

​#2 Incorrect flue size for the appliance - With high-efficiency oil-fired appliances the flue size requirement is typically smaller compared to older appliances. For example, an older unit may require an 8'' opening, however most newer units require smaller flue opening of 5''. This equates to a 60% reduction in the flue size. If you haven't relined your chimney to accommodate the high-efficiency unit, unseen problems will begin to occur such as issues with draft, efficiency, performance and carbon monoxide. Additionally acidic byproducts wont vent properly and higher settlement is experienced on the cooler liner, accelerating the erosion.

#3 Lower flue gas temperature - Water vapor is a normal byproduct of combustion however with high-efficiency oil-fired appliances the combustion gases produced are cooler than older units. This can lead to more water vapor cooling and condensing to the clay liner instead of quickly leaving the chimney. When this happens you'll get spalling brick, flaking liner, eroded mortar joints, moisture transfer to the walls, and eventually carbon monoxide leaking in to the home.